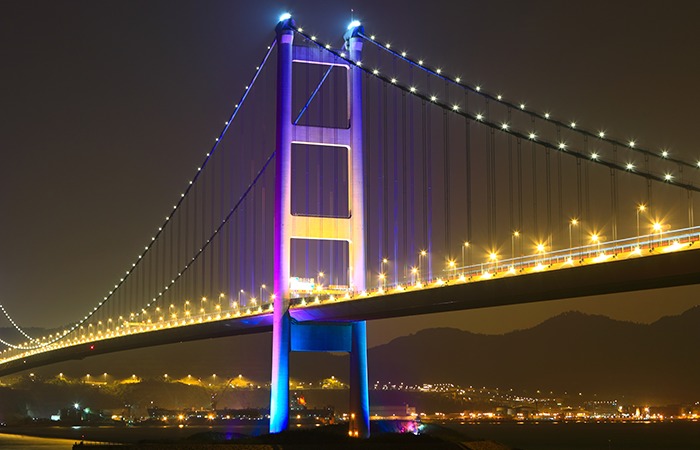 Experimental stress analysis requires the measurement of minute strain-induced resistance with high resolution. With the invention of the first bonded, electrical resistance strain gage, it was obvious that a Wheatstone bridge circuit—as shown in Figure 1 below—was required to provide it. Today, this bridge circuit still provides the most convenient method for measuring and scaling resistance changes during structural testing. 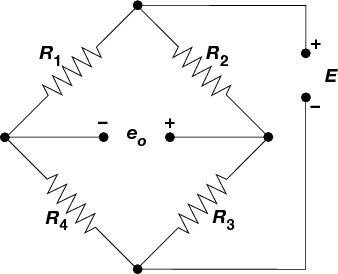 The relationship between strain and bridge output is a common source of confusion. To explain it in simple terms, we'll describe the output of a strain gage bridge circuit—assuming the strain gage has a gage factor of 2.0—in the formula below:

where N = the number of active arms.

In experimental stress analysis, the most common bridge circuit employed is a quarter-bridge. In this case, the output of the circuit is determined by the following formula:

If the supplied excitation voltage is 10 VDC, then the output will be 5 µV per µɛ.

In load cells and other transducer applications, the OEM manufacturer typically chooses to use a full-bridge configuration. In this case, the output of the bridge circuit will be determined by the following formula: (0.5 µV / V / µɛ) X 4.

If the excitation voltage is 10 VDC, then the output will be 20 µV per µɛ.

Most load cells and transducers are manufactured so the full-scale rated mechanical load will produce 1000 µɛ at the gage locations. So the full-scale output is calculated as:

Typically these transducers are calibrated in mV/V at full scale, so the end-user may calculate the full-scale output based upon their specific power supply excitation level.  In this case, with an excitation voltage of 10 VDC, we would have a 2 mV/V device.