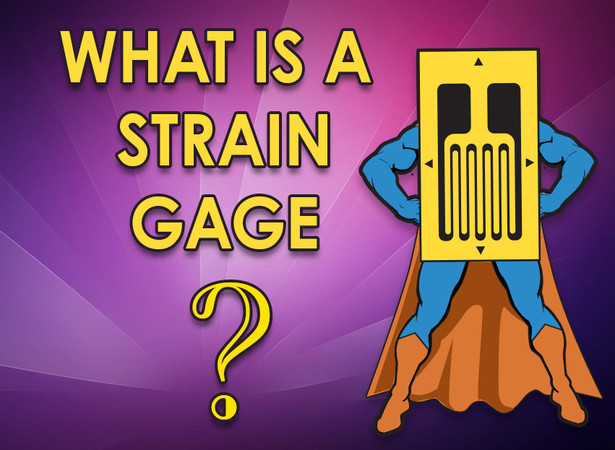 What is a strain gage?

A farmer may use the word “strain” to mean a certain line of plants or animals: “Kentucky Wonder is a popular strain of green beans!”  The psychologist would tell you to avoid severe mental or emotional strain.  Of course, our products are not used to measure any of these strains.

Just What is Mechanical Strain?

When a body (engineering lingo for a solid object) is stressed (is subjected to a load), the body is deformed (changed in shape).  Strain is a measurement of the deformation, or change in shape, of an “engineering” body.

Here is a simple example illustrating the concept of strain:  When a rubber band (a solid object) is stressed (subjected to a load), the rubber band becomes longer and thinner (changed in shape).  The change in length, compared to the original length, is strain.

In engineering work involving most common structural materials like iron, steel, and concrete, strains as small as on millionth of an inch per inch must be measured.  That’s like measuring a change of one inch in length of a rope originally 16 miles long!  For making engineering measurements of such small strains, electrical resistance strain gages are the most commonly used technique.

How Does a Strain Gage Work?

Our Technology Has Modernized Strain Gages

In the days before Micro-Measurements, small metal wires attached to paper backings were used as strain gages.  When the strain gage was stretched, the wires – like the rubber band – became longer and thinner.  And the resistance of the strain gage increased.

Modern day strain gages, like those produced by Micro-Measurements, have replaced the wire grids and paper backings with grids etched into metal foil and backings of special resin materials.  Further improvements in manufacturing processes, such as Micro-Measurements Advanced Sensors, provide gage-to-gage consistency that was never before possible.

Micro-Measurements strain gages are used throughout the world to help test airplanes, automobiles, horseshoes, tractors, engines, bridges, spacecraft, roller coasters, and just about anything else that carries a load.  Another major use of strain gages is in electronic scales.  Inside the scale, strain gages are installed on a specially shaped piece of metal.  A very small computer used the measured strain to calculate the weight of any objects placed on the scale – from apples in the supermarket to trucks along the highway.

Over the years, the strain gage has involved all of us at Micro-Measurements in just about every major engineering project in the world!